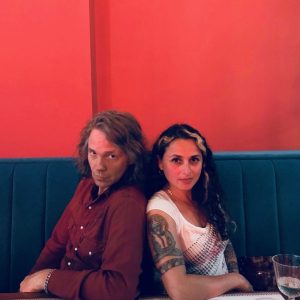 Jimena Bermejo and Chris Brokaw began collaborating in 2017 after many years of mutual admiration. Their works combine the best elements of their shared interests in punk, poetics and the beauty of blood. The pieces they will bring to MAGMA,  ” Slide,” “I’m The Only One” and a new work in progress, “Our Fathers (who aren’t in heaven)” explore different ways to mix, play, and exchange their instruments: guitar and body.
Their work has been shown at Judson Church in New York City, Cathedral Arts Festival in Belfast, Green Street Studios in Cambridge and The Distillery Gallery in South Boston

Jimena Bermejo sees her body as a tool to create a dynamic and intimate relationship with an audience. She elicits a combination of physical and emotional engagement in pieces woven from memories, music, and personal relationships. She holds an MFA from Massachusetts College of Art and Design’s Studio for Interrelated Media and a BFA in Dance from The Boston Conservatory. Most recently, she has shown her work at The Cathedral Arts Festival in Belfast, U. K, The Judson Church in NYC, Distillery Gallery in South Boston, Le Lieu in Quebec, 808 Gallery in Boston, Mobius Gallery, Green Street Studios and The Dance Complex in Cambridge. She has also shown at the Art Beat and SomDance Festivals in Somerville. Jimena is currently a member of Mobius Artists Group and Caitlin Corbett Dance and has performed with many other local choreographers.

Chris Brokaw is a singer, songwriter, guitarist, drummer and film composer based in Boston. Perhaps best known for his pioneering work with the bands CODEINE and COME, since 2002 Chris has released over a dozen solo albums of instrumental and vocal musics, composed music for film and dance, and worked as an accompanist to THURSTON MOORE, STEVE WYNN, EVAN DANDO, CHRISTINA ROSENVINGE, RHYS CHATHAM, JOHNNY DEPP and GG ALLIN. He currently plays in THE NEW YEAR, THE MARTHA’S VINEYARD FERRIES, THE EMPTY HOUSE COOPERATIVE, and THE LEMONHEADS, and in duos with GEOFF FARINA and LORI GOLDSTON. Chris performed with 200 guitarists under the tutelage pf Rhys Chatham at Lincoln Center; one of 77 drummers in the Boredoms’ epic 77BOADRUM in Brooklyn; and with Dirtmusic at the Festival In The Desert in Essakane, Mali.

Chris’ 2018 releases include CHARNEL GROUND, a collaboration with James McNew and Kid Millions (on 12XU, April 2018) and the forthcoming solo album END OF THE NIGHT (on VDSQ, autumn 2018). Other upcoming performances include the Hopscotch Festival (Raleigh, NC) and the National Gallery (Washington, DC) in September and the Invisible Festival (Brest, France) in November.
+ Add to Google Calendar+ Add to iCalendar