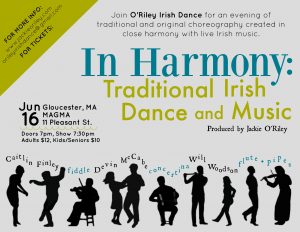 Jackie O’Riley spent her formative dance years in the Irish set dancing community in Boston, MA.  Over the past 15 years, she has ardently sought out old-style or traditional step dancing, sean-nós dance, and set dancing and is now a sought after performer and teacher, with a unique repertoire that includes older steps she’s collected from masters and field footage, and original material she’s composed.  Jackie performs and teaches in the US, Canada, and Ireland, was an original member of the touring sean-nós dance show Atlantic Steps, and most recently performed at the Abbey Theatre in Dublin as part of Na Píobairí Uilleann’s production, “The Sound of Ireland” .  Jackie is the co-recipient of a 2017 grant for choreographers through the Boston Foundation and is currently working on filming a first-of-it’s-kind “visual album” of traditional dance.  Above all, she believes in prioritizing musicality in dancing, being a part of the wider musical and traditional community, and maintaining the joy that drew her to the tradition in the first place. www.jackieoriley.com
O’Riley Irish Dance is a unique, non-competitive program for kids and teens now in it’s 8th year, in Boston, MA.  Our performance group is made up of dedicated teen dancers who have spent the last 6-7 years studying and pursuing the non-competitive and social side of Irish dance: traditional step, sean-nós, and set dancing. Our show, “In Harmony” is a celebration of the close connection between traditional Irish dance and music, the relationships formed through dancing together for years, and working in close harmony with traditional musicians in our community.  Join us for an evening of solos, duets, and ensemble pieces co-created by Jackie, the dancers, and the musicians.  We’re absolutely delighted to share our work in the Gloucester community!

Will Woodson (Irish flute, uilleann pipes) has spent a decade as a professional traditional musician, performing and teaching music in North America, Scotland, Ireland, and continental Europe. An East Coast native, he lived in Glasgow, Scotland and New York City before moving to Portland, Maine. He holds a master’s degree in traditional music from the Royal Conservatoire of Scotland. On the flute, he’s heavily influenced by the music of the older generations of North Connacht musicians, as well as the fiddle tradition of Donegal; on the pipes, Seamus Ennis, Willie Clancy, and Patsy Touhey are at the fore of his listening. Will plays in the band Daymark and is highly active in the Portland and Boston traditional music scenes. In addition to his work as a musician, Will is kept busy at home as a maker of bagpipes.

Originally from Philadelphia, Caitlin Finley learned much of her music at sessions from some of the great traditional players who live in the area. As a teenager, she took fiddle lessons from Rose Flanagan and Brian Conway, and subsequently fell in love with the fiddle music of Sligo. She has since developed a great interest in Northern music, and her playing reflects the influence of both traditional styles. Caitlin currently lives in Boston, where she is a frequent participant in the city’s rich traditional music scene.

Devin McCabe is a multi-instrumentalist from Milwaukee, WI. He began playing traditional Irish music on the fiddle and later added the concertina and piano to his repertoire. He has been a regular performer at Milwaukee Irish Fest over the past twenty years and a tutor at Grand Canyon Celtic Arts Academy. Today, Devin can often be seen leading sessions in the Boston area. He currently lives in Cambridge and works in education technology.
+ Add to Google Calendar+ Add to iCalendar