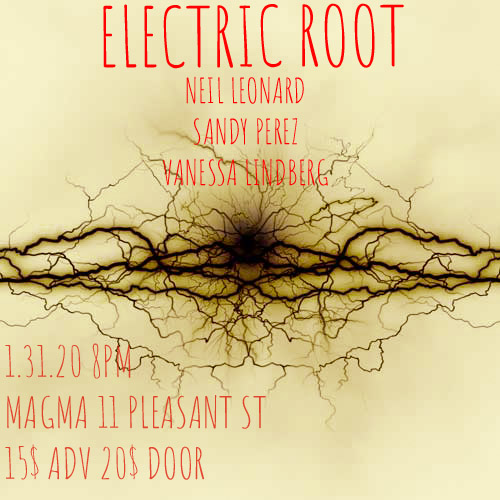 Electric Root performs a multimedia work for saxophone/electronics, folkloric ensemble and video. It Is an exploration of ancient past and distant future, combining the depth of afro-cuban folklore and expansive saxophone melodies within the matrix of electronic vibration. The piece addresses the devastating impact of global warming on the culture in Matanzas, Cuba.

Sandy Perez was born in Matanzas, Cuba in el barrio de la marina, the marina neighborhood. As the poorest location in Matanzas, la marina overflows with cultural and spiritual riches. Sandy is a descendant of the Villamil family and was raised amongst them playing sacred drums for the African deities and spirits in familial ceremonies. His gift was quickly recognized by family, community and spirits alike and at the age of 16 gained his artistic position with Grupo Afrocuba de Matanzas, a cultural institution representing the varied and rich genres of afro-cuban folklore worldwide.

Sandy’s first international gig was with Cuban modern artist Manuel Mendive in 1996, travelling to Brazil with Cuban akpon (ceremonial lead singer) Lazaro Ros. There they melded art, culture, spirituality and music, joining the diasporic nations of Brazil and Cuba and discovering near lost connections. Before leaving Cuba, he toured Europe with Afrocuba, and later with experimental jazz musician Steve Coleman.

In 1999 he emigrated to the US and began teaching from coast to coast. He has played and recorded with countless musicians through many genres including Yosvany Terry, Steve Coleman, Miguel Anga, Daphnis Prieto, Olodum, los Munequitos de Matanzas, Pedrito Martinez- the list goes on and on.

In more recent years he has performed and presented at many Universities and museums including Harvard University, Humboldt State University, CSU Davis, Berklee College of Music, Smithsonian National Portrait Gallery, Peabody Essex Museum and the Rubin Museum of Art to name a few.

Sandy is a living lexicon of the language of the drum. His hands tell the sacred stories of his profound ancestry. His existence preserves these deep roots as he forges meaningful artistic connections crossing all boundaries of race, nationality and language.

Neil Leonard is a sound artist, saxophonist and composer. He often performs his compositions for saxophone and electronics with top musicians and folkloric ensembles. Recent sound installations explore how global marketing impacts our listening, and were made in collaboration with bartenders, biologists, street criers and dock workers. For years, he has created projects engaging musicians living in both the United States and Cuba, where art is both a final result, and means to circumvent prohibition.

Vanessa Lindberg is a collector of sacred and secular song from Matanzas, Cuba. She has studied in all of the major cabildos (temple houses) of Matanzas and strives to preserve and give new life to the deepest, darkest afro-cuban roots. A Gloucester native, she found her spiritual home on her first trip to Matanzas, Cuba in 2003. Over many trips during the following decade, she wandered through the streets and sat at the feet of the elders until she became fluent in Cuban Spanish and was invited to lead ceremonies in song as akpon. She has performed at Harvard University, The Smithsonian National Portrait Gallery, Peabody Essex Museum, The Rubin Museum, Smith College and has taught workshops all over the US.